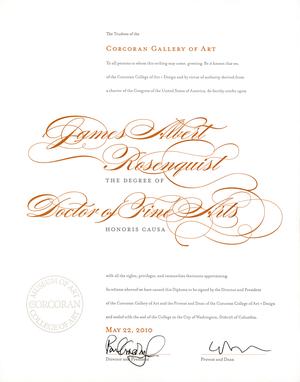 Rosenquist’s latest series of work is featured in the exhibition James Rosenquist: The Hole in the Middle of Time and The Hole in the Wallpaper that opens in February at Acquavella Contemporary Art, Inc., in New York City. The exhibition features seven paintings as well as a selection of motorized works, with attached mirrors, that spin. In the spring, he receives an honorary doctorate degree from the Corcoran College of Art, Washington, D.C. Rosenquist’s work is shown in two exhibitions opening at the Museum of Modern Art, New York, in September: Counter Space: Design and the Modern Kitchen, and On to Pop. He receives the inaugural Hermitage Museum Foundation Award at the Hermitage Museum Foundation’s first Hermitage Dinner at Christies in New York City on November 6.

Rosenquist begins a new body of work, the Multiverse series, which features imagery of nebulae, star systems, and galaxies and that he will continue through 2015. Two years after the devastating fire on his Florida property, Rosenquist completes the painting The Geometry of Fire (2011), a meditation on the destruction; “The title is ultimately nondescriptive, because there is no such thing as geometry in fire, it’s just wild, totally reckless, an accidental illumination an immolation. Humans always want to inject geometry and meaning into nature, but it’s a mystery.”29 He is recognized as an Alumni of Notable Achievement by the College of Liberal Arts, University of Minnesota, Minneapolis on March 31. Rosenquist’s work is included in the exhibition Ileana Sonnabend: An Italian Portrait at the Peggy Guggenheim Collection, Venice, Italy, and in the exhibition Homage to Leo Castelli—9 Works by 9 Artists at the Fundación Juan March in Madrid and in Palma de Mallorca, Spain. The Minneapolis College of Art and Design bestows upon him a Lifetime Achievement Award on September 17. Rosenquist paintings once owned by lifelong friend Robert Rauschenberg—including Spaghetti (1965) and Waiting for Bob (1979)—are featured in Gagosian Gallery’s show, The Private Collection of Robert Rauschenberg, opening in November in New York City. 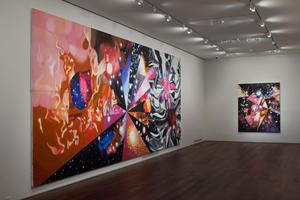 Installation view James Rosenquist: Multiverse You Are, I Am exhibition, Aquavella Galleries, New York, 2012. Works pictured, on the left: The Geometry of Fire (2011); on the right: Sand of the Cosmic Desert in Every Direction (2012)

The Museum of Modern Art in New York dedicates an exhibition, James Rosenquist: F-111, to Rosenquist’s room installation and historic painting F-111 (1964–65). He completes two prints with etched and rotating mirrors (and with imagery related to the Multiverse series of paintings) at ULAE. Rosenquist’s latest series is featured in the show, James Rosenquist: Multiverse You Are, I Am, that opens in September at Acquavella Contemporary Art, Inc., in New York City. Rosenquist receives the Isabella and Theodor Dalenson Lifetime Achievement Award as part of the National Arts Awards organized by Americans for the Arts in New York City on October 15. His iconic painting, I Love You with My Ford (1961), is included in the Vitra Design Museum’s exhibition, Pop Art Design that travels internationally.

Rosenquist is presented with the ASF Cultural Award at the Spring Gala of the American-Scandinavian Foundation at the Pierre Hotel, in New York City, on April 26 in recognition as one of the founders of American Pop art. North Dakota Museum of Art hosts James Rosenquist: An Exhibition Celebrating His 80th Birthday in Grand Forks, North Dakota, which opens in August. A friend and correspondent to the late artist Ray Johnson, Rosenquist’s work is included in the exhibition, Correspondents of Ray Johnson, at the Krannert Art Museum, University of Illinois at Urbana-Champaign. His work is also featured in the fall exhibition Made in U.S.A.: Rosenquist / Ruscha at the Museum of Art, Washington State University in Pullman. Having exhibited with the gallerist in the 1960s and 1970s, Rosenquist’s early work Volunteer (1964) is included in the exhibition Ileana Sonnabend: Ambassador for the New that opens in December at the Museum of Modern Art, New York.

Writer Daniel Kunitz and Rosenquist discuss the Multiverse series of works in the article “In the Studio: Master of Space and Time,” in the February issue of Art + Auction. In March, Rosenquist and wife Mimi Thompson purchase a house in Miami, Florida, and set up a working studio there, where he continues working on the Multiverse series. In the spring, Rosenquist’s work is included in the exhibition Witness: Art and Civil Rights in the Sixties at the Brooklyn Museum, New York, which travels to two venues in the United States. A selection of paintings from the Multiverse series are shown in the exhibition James Rosenquist: All Things are Devoid of Intrinsic Existence at Wetterling Gallery, in Stockholm, Sweden. Featuring loans from the former collection of the German industrialists Peter and Irene Ludwig borrowed from six different institutions, Rosenquist’s work is presented in the exhibition Ludwig Goes Pop that opens at the Museum Ludwig in Cologne in October, and travels to Museum Moderner Kunst Stiftung Ludwig Wien in Vienna, Austria, in 2015. In November, the focused survey exhibition James Rosenquist: Illustrious Works on Paper, Illuminating Paintings opens at Oklahoma State University Museum of Art, Stillwater, and travels to Syracuse University Art Galleries, Syracuse, New York, in 2015.

Rosenquist is honored as the inaugural recipient of the Spirit of Tomorrow Award by the Women of Tomorrow, Mentor and Scholarship Program, Miami, Florida on March 7. His work is presented in the exhibition, The New York School, 1969: Henry Geldzahler at the Metropolitan Museum of Art, at Paul Kasmin Gallery, in New York City. Rosenquist’s painting Zone (1961) is included in the International Pop exhibition that opens at Walker Art Center, Minneapolis, Minnesota and travels to the Dallas Museum of Art, Texas, and the Philadelphia Museum of Art. Rosenquist completes An Intrinsic Existence (2015), the last painting produced as part of his final body of work, the Multiverse series. 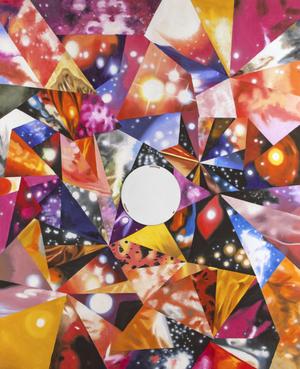 Rosenquist’s painting and room-installation F-111 (1964–65) is the sole work to represent the year 1964 in the Museum of Modern Art’s year-long exhibition, From the Collection: 1960–69, opening in March. On March 31, Rosenquist receives the Lifetime Achievement in Printmaking Award from SGC International during the SGCI Printmaking Conference in Portland, Oregon. In the spring, Rosenquist is the first living artist given a special exhibition at the Judd Foundation in New York City. The exhibition, James Rosenquist, is curated by Flavin Judd and features the paintings Shadows (1961), Yellow Applause (1966), and Time Dust—Black Hole (1992), and the prints Horse Blinders (east) (1972) and Horse Blinders (west) (1972). Rosenquist’s grandchild, Oscar, is born on October 14 to daughter Lily Rosenquist and son-in-law Andrés Altamirano in New York City. In November, Galerie Thaddaeus Ropac in Paris opens the survey exhibition James Rosenquist: Four Decades 1970–2010 at the gallery’s Pantin location, and James Rosenquist: The Collages 1960–2010 at their Marais location.

James Rosenquist dies on March 31 in New York City. The Museum of Modern Art in New York hosts a memorial service in celebration of his life and artistic achievement on June 26, with speakers including Glenn Lowry, Judith Goldman, Richard Feigen, Frank Stella, John Rosenquist, Agnes Gund (in Gund’s absence, comments are read by her personal curator), Thaddaeus Ropac, Gianfranco Gorgoni, Hilton Als, and Ann Temkin. The survey exhibition James Rosenquist: Painting as Immersion opens at the Museum Ludwig in Cologne, Germany, in November and travels to ArOS Aarhus Art Museum in Denmark in spring 2018. University of South Florida Contemporary Art Museum in Tampa organizes the tribute exhibition, James Rosenquist: Tampa, presenting prints Rosenquist produced at Graphicstudio/University of South Florida and at other local presses including Flatstone Press, Topaz Editions, and Pyramid Arts Ltd, with additional works borrowed from private collections. The museum hosts a memorial service for Rosenquist in commemoration of his life and recognition of his artistic contributions in Florida and beyond on December 2, with speakers that include Sarah Bancroft, Ruth Fine, Peter Foe, Gail Levine, Patrick Lindhardt, Margaret Miller, John Rosenquist, and Don Saff.