James Albert Rosenquist is born on November 29, 1933, in Grand Forks, North Dakota, to Ruth Hendrickson Rosenquist and Louis Rosenquist, who are of Norwegian and Swedish descent respectively.

During Rosenquist’s childhood, his family moves from one Midwestern city or farming community to another, including Atwater, Perham, and Minneapolis in Minnesota, and Tipp City and Vandalia in Ohio. Rosenquist’s father works at a series of jobs, including a motor-court and gas-station operator, airplane mechanic, and other positions in the aviation industry. Rosenquist’s mother and his paternal uncle, Albert, have experience as pilots. By age eight Rosenquist has become an avid maker of model airplanes. In 1941 he visits the Minneapolis Institute of Arts with his mother, an amateur painter. When he shows an aptitude for sketching at an early age, she encourages him.

By 1944 his family has settled down in Minneapolis, purchasing a house on Nokomis Avenue. In his teenage years Rosenquist paints portraits and landscapes. He submits a painting of a sunset and wins a scholarship in junior high school for four Saturdays of art classes at the Minneapolis School of Art at the Minneapolis Institute of Arts. At the institute Rosenquist is first exposed to quality art supplies—such as Arches and Strathmore papers, which he will use throughout his career—and takes classes with older students and teachers who have studied in Paris and across Europe on the GI Bill. 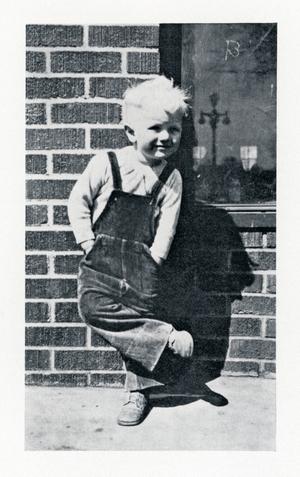 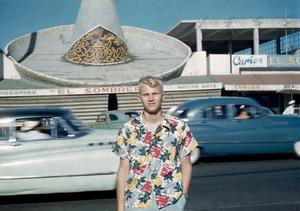 Rosenquist in Tijuana, where he drove with his father in 1951.

In 1951 Rosenquist and his father travel by car to visit California and the Pacific Northwest. While in Southern California, they cross the border into Mexico. In spring 1952 Rosenquist graduates from Roosevelt High School in Minneapolis. With the encouragement of his mother, he enrolls in art classes at the University of Minnesota, Minneapolis. He attends the university from fall 1952 until spring 1954, learning oil painting, egg tempera, and Renaissance underpainting from painter Cameron Booth.1 Booth—who had studied with the painter Hans Hofmann and taught at the Art Students League, New York, in the mid-1940s—becomes Rosenquist’s mentor. Booth takes Rosenquist and another student to view Impressionist and old master paintings at the Art Institute of Chicago.

During the summer of 1953, Rosenquist works for the commercial painting contractor W. G. Fischer. He travels across the Midwest as part of a Fischer crew, painting Phillips 66 signs, gasoline and storage tanks, refinery equipment, and grain elevators. After leaving the University of Minnesota with an associate’s degree in studio art, Rosenquist paints billboards in Minneapolis and Saint Paul for General Outdoor Advertising, including promotional signs for the movie Davy Crockett, King of the Wild Frontier, advertisements in Saint Louis for Corby’s Whiskey, and advertisements
in Minneapolis for Northwest Airlines and Coca-Cola. He travels to Florida and Cuba.

Encouraged by Cameron Booth, Rosenquist applies to the Art Students League, New York. He receives a scholarship, which includes a year’s tuition but nothing for room and board. Rosenquist arrives in New York with a few hundred dollars as well as Booth’s letter of introduction and his list of affordable restaurants. At the Art Students League, Rosenquist studies under Will Barnet, Edwin Dickinson, Sydney E. Dickinson, George Grosz, Robert Beverly Hale, Morris Kantor, and Vaclav Vytlacil. Rosenquist frequents the Cedar Tavern, where he meets painters Willem de Kooning, Franz Kline, and Milton Resnick. Diagnosed with pneumonia before the end of the academic year, Rosenquist is treated in the welfare ward at Roosevelt Hospital in Manhattan. 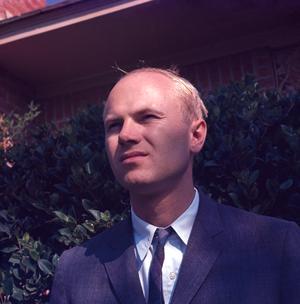 James Rosenquist during the 1955–56 academic year at the Art Students League, New York. 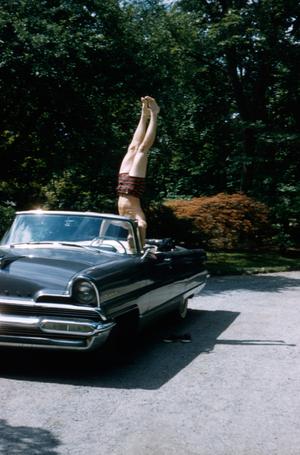 Rosenquist leaves the Art Students League, New York, after the 1955–56 academic year. He works as a chauffeur and bartender for Roland and Joyce Stearns and also minds their children at the family’s Irvington, New York, estate. There he works on small abstract oils and drawings in an octagonal studio space on the top floor of the Stearns home. In September he meets artists Jasper Johns, Ray Johnson, and Robert Rauschenberg in New York. He also meets Robert Indiana, Ellsworth Kelly, and Jack Youngerman this year.

Rosenquist quits his job with the Stearns family and moves back to Manhattan. He lives for a time in a loft at Sixty-third Street and Amsterdam Avenue, which he shares with Takeshi Asada, Alice Forman, Chuck Hinman, Peggy Smith, and Joan Warner. Rosenquist joins Local 230 of the International Brotherhood of Painters and Allied Trades union and begins painting billboards in New York. His first assignment is to paint a Hebrew National Salami sign on Flatbush Avenue in Brooklyn for A. H. Villepigue Company. The firm lets him go shortly after this task. He then paints signs in Brooklyn for General Outdoor Advertising but is subsequently laid off. Rosenquist travels home to Minnesota, retaining his studio in New York. In Minneapolis he paints promotional signs on a freelance basis, including a number of automobile advertisements on building exteriors. He subsequently returns to New York, where he begins painting billboards for Artkraft Strauss Sign Corporation. He lives briefly in a studio at Broadway and Twenty-seventh Street. In his spare time Rosenquist attends drawing classes with Claes Oldenburg and Henry Pearson. The sessions are organized by Robert Indiana and Jack Youngerman, whose wife, Delphine Seyrig, serves as a model. Simultaneously, Rosenquist creates abstract pieces, including a nine-by-seventeen-foot drawing, anticipating the large scale of his future art.2 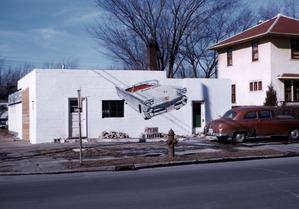 Cadillac Rosenquist painted on the outside of an auto shop, Minneapolis, 1958.

As a commercial artist, Rosenquist paints billboards in Manhattan and Brooklyn, including signs in Times Square for the Astor Theatre, Victoria Theater, and Morosco Theatre, all located at Broadway and Forty-fifth Street. He moves to an apartment and studio at Second Avenue and Ninety-fourth Street, where he continues to create abstract paintings and works on paper. He also begins looking for a separate studio space. In the spring Rosenquist’s abstract painting Passing before the Horizon (1957) is included in the 1958 Biennial: Paintings, Prints, Sculpture at the Walker Art Center, Minneapolis.

At age twenty-five Rosenquist becomes head painter at Artkraft Strauss Sign Corporation. He meets Gene Moore, head window designer at Tiffany & Co., Bonwit Teller, and other stores, who hires him periodically over the next two years to design displays and paint backdrops for store windows on Fifth Avenue in Manhattan. 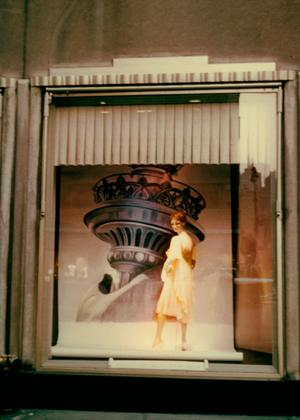