In June, with wife Mimi Thompson and daughter Lily, Rosenquist attends the Friends of Art and Preservation in Embassies reception hosted by Hillary Clinton at the White House, along with fellow artists Ellsworth Kelly, Joel Shapiro, and Frank Stella. Rosenquist’s seven-color lithograph The Stars and Stripes at the Speed of Light (2000) is unveiled at the reception. He donates the edition of fifty to American embassies around the world. Among the artists participating in the program are Louise Bourgeois, Roy Lichtenstein, Maya Lin, Robert Rauschenberg, and Stella.

In the spring Rosenquist travels to Paris, where his work is included in the exhibition Les Années Pop: 1956–1968 at the Musée National d’Art Moderne, Centre Georges Pompidou. Gagosian Gallery, New York, hosts the solo show James Rosenquist: The Stowaway Peers Out at the Speed of Light at its Chelsea space, which features paintings from the Speed of Light (1999–2001) series. He is also represented in the Gagosian exhibition Pop Art: The John and Kimiko Powers Collection at the gallery’s Madison Avenue location. In June at the Tampa Museum of Art, Rosenquist is inducted into the Florida Artists Hall of Fame. The thirtieth artist or performer thus honored, he joins a group including Jimmy Buffett, Ray Charles, Ernest Hemingway, Zora Neale Hurston, Robert Rauschenberg, Burt Reynolds, and Tennessee Williams. 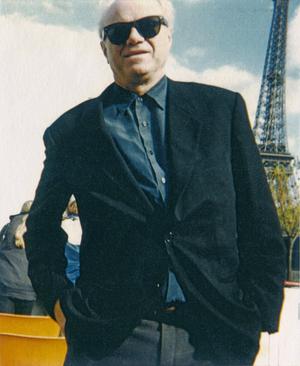 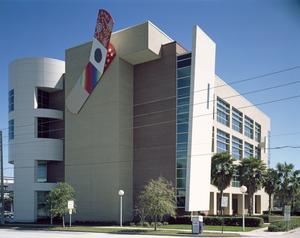 Rosenquist donates a large sculpture to the All Children’s Hospital, University of South Florida, Saint Petersburg. Affixed to the outside of the hospital’s state-of-the-art Children’s Research Institute, the aluminum and fiberglass sculpture, shaped like an adhesive bandage, is decorated with a colorful motif of a rainbow, a tic-tac-toe game, and various figures and numbers.28 Dedicated in a ceremony on April 23, the sculpture is the second public art project Rosenquist has completed in Florida. He receives an Honorary Doctorate of Humane Letters from the University of Minnesota, Minneapolis, on May 19. In June the Fundación Cristóbal Gabarrón of Valladolid, Spain, confers upon him its annual international award for art in recognition of his great contributions to universal culture. In the fall he is included in Surrounding Interiors: Views inside the Car, organized by Judith Hoos Fox at the Davis Museum and Cultural Center at Wellesley College, Massachusetts. Rosenquist signs the “Not In Our Name Statement of Conscience” petition coordinated by the Bill of Rights Foundation to protest the military actions of the United States government in response to the events of September 11, 2001. Among the forty thousand signatories are prominent actors, artists, and political activists. The statement is published throughout the fall and winter in major newspapers across the United States and abroad, including The New York Times, Chicago Tribune, San Francisco Chronicle, Los Angeles Times, The Guardian (London), The Daily Star (Beirut), and La Jornada (Mexico City).

Rosenquist’s work is included in two Pop art exhibitions in Europe: Das Grosse Fressen: Von Pop bis Heute at the Kunsthalle Bielefeld, Germany, and Pop Classics at ARoS Aarhus Art Museum, Denmark. In the fall, his painting Untitled (1987) is featured in the exhibition The Flower as Image, at Louisiana Museum of Modern Art, in Humlebæk, Denmark.

Rosenquist receives the Legends Award from Pratt Institute, Brooklyn, New York on April 19. He is bestowed an Honorary Doctorate in Fine Arts Degree from North Dakota State University, Fargo, on May 13. The exhibition James Rosenquist: Ten Paintings, 1965–2004; Collage, 1987 opens at Givon Art Gallery, Tel Aviv, Israel. His painting Untitled (1987) is included in the exhibition Flower Myth: Van Gogh to Jeff Koons at the Fondation Beyeler, in Riehen/Basel, Switzerland. Rosenquist’s second paper suit (released as a limited edition by Hugo Boss in 1998 in dyed Tyvek) is featured in the exhibition Pattern Language: Clothing as Communicator at Tufts University Art Gallery in Medford, Massachusetts, and travels to four subsequent venues. 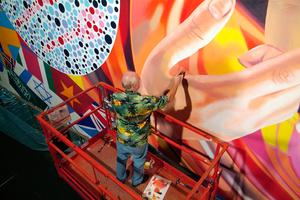 Rosenquist working on Celebrating the Fiiftieth Anniversary of the Signing of the Universal Declaration of Human Rights by Eleanor Roosevelt (1998), Basel, Switzerland, 2006

Rosenquist receives the Lifetime Achievement Award from Polk Museum of Art, Lakeland, Florida, on March 21, where his work is also featured in the exhibition Pop Art 1956–2006: The First 50 Years. The exhibition Welcome to the Water Planet: Paperworks by James Rosenquist opens at the National Gallery of Australia, Canberra, in the summer. His work is featured in London, England, in the show James Rosenquist, which opens at the Haunch of Venison gallery in the fall. Rosenquist donates a painting to the collaborative sculpture project The Peace Tower, 2005–2006, created by Rirkrit Tiravanija and Mark di Suvero for the 2006 Whitney Biennial. The sculpture project is a reconception of the original 1966 Peace Tower (officially titled “The Artists’ Tower of Protest”) to which Rosenquist and more than four hundred artists contributed artworks in protest to the Vietnam war.

Rosenquist’s work is included in the exhibition Art in America: Three Hundred Years of Innovation, co-organized by the Solomon R. Guggenheim Museum and the Terra Foundation, which opens in February at the National Art Museum in Beijing, China, and travels to Shanghai, and then to Russia and Spain. He begins a new body of work—the Time Blades series—in which he contemplates the concepts of time and existence. Works from the series are featured in James Rosenquist: Time Blades, at Acquavella Contemporary Art, Inc., New York. His work is included in the exhibition Pop Art Portraits at the National Portrait Gallery, London, England, which travels to the Staatsgalerie Stuttgart, Germany. 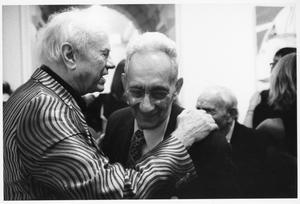 Rosenquist’s work is included in the exhibition The Story Goes On: Contemporary Artists in the Wake of Van Gogh at MODEM Centre for Modern and Contemporary Arts, Debrecen, Hungary, and in Fernand Léger: Paris–New York at the Fondation Beyeler, Riehen/Basel, Switzerland, in the summer. His painting on slit Mylar, Daley Portrait (1968), featuring an image of Chicago Mayor Richard J. Daley, is shown in the exhibition 1968: Art and Politics in Chicago at DePaul University Museum in Chicago, Illinois. The early painting Coenties Slip Studio (1961) is presented in the exhibition Circa 1958: Breaking Ground in American Art at Ackland Art Museum, The University of North Carolina at Chapel Hill.

On April 25 a brush fire spreads across Rosenquist’s property in Aripeka, Florida, consuming sixty-two of his acres and destroying his house, office, studio, and other buildings. His print archives and numerous paintings are consumed by the flames. Rosenquist moves his office and work space to a stilt-house on the property (located across a road from the area destroyed by fire). He encloses the area under the house to create a studio in which he begins painting again. In October Rosenquist’s memoir, Painting Below Zero: Notes on a Life in Art, is published by Alfred A. Knopf to positive reviews. The Salvador Dalí Museum in St. Petersburg, Florida, honors him with The Order of Salvador, on November 5. Rosenquist’s painting Tosca—Music, Murder and Mayhem (2009) is shown in the exhibition Something About Mary at The Metropolitan Opera, New York; for the exhibition, he is one of sixteen contemporary artists invited to create work inspired by composer Giacomo Puccini’s 1900 opera Tosca, which opens the The Metropolitan Opera’s 2009–10 season. In sketches and preparatory works on paper, Rosenquist develops the collage Red, White and News for the cover of the holiday 2009 issue of The New York Times Style Magazine. 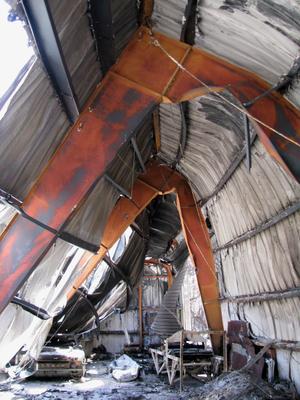 Aftermath of the fire on Rosenquist's property that destroyed the studio, office, house, and other buildings, in Aripeka, Florida, 2009