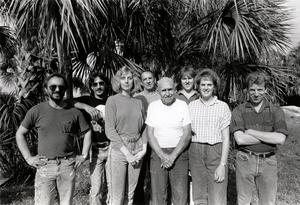 Vandals slash a Rosenquist painting as well as a Roy Lichtenstein painting on view in art dealer Leo Castelli’s booth at the International Art Fair FIAC in Paris. Castelli does not press charges. F-111 (1964–65) is included in High and Low: Modern Art and Popular Culture at the Museum of Modern Art, New York, which is curated by Kirk Varnedoe and Adam Gopnik.

In February the State Tretiakov Gallery, Central House of Artists, Moscow, hosts Rosenquist: Moscow 1961–1991, an exhibition organized by Donald Saff. This major retrospective is one of the first post-Cold War exhibitions in Russia of work by an American artist. IVAM Centre Julio González, Valencia, Spain, presents the large-scale painting exhibition James Rosenquist. Rosenquist’s work is represented in The Pop Art Show at the Royal Academy of Arts, London. Works included in the exhibition are Hey! Let’s Go for a Ride (1961), I Love You with My Ford (1961), Look Alive (Blue Feet, Look Alive) (1961), and Star Thief (1980). Rosenquist is awarded the Florida Prize by The New York Times Regional Newspapers on June 27. 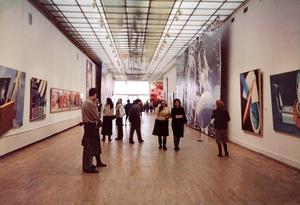 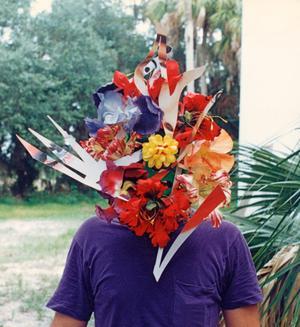 Rosenquist is awarded the Chevalier dans l’Ordre des Arts et des Lettres by Jack Lang, French Minister of Culture. Gagosian Gallery, New York, hosts the exhibition James Rosenquist: The Early Pictures 1961–1964, in which Rosenquist for the first time displays a small number of his preparatory collages for paintings. The collages are also published for the first time, in the exhibition’s catalogue. He is represented in the exhibition Hand-Painted Pop: American Art in Transition, 1955–62 at the Museum of Contemporary Art, Los Angeles. A limited number of Rosenquist’s preparatory collages are shown in this exhibition as well, and are reproduced in the accompanying catalogue. Rosenquist begins painting the series Gift Wrapped Dolls (1992–93),25 which the artist describes as a response to the AIDS crisis. In the
fall the Gift Wrapped Dolls paintings are featured in the exhibition James Rosenquist: Recent Paintings at Galerie Thaddaeus Ropac, Paris. He completes the monumental print Time Dust, measuring approximately seven by thirty-five feet.

Organized by Constance Glenn at the University Art Museum, California State University, Long Beach, the exhibition James Rosenquist: Time Dust, The Complete Graphics, 1962–1992, opens at the first of its ten venues: the Walker Art Center, Minneapolis. It is accompanied by an exhibition catalogue that includes a catalogue raisonné of Rosenquist’s graphic works and also illustrates many of his preparatory collages. On March 13 hurricane-strength winds and a tidal surge on the Gulf of Mexico from a tropical storm flood Rosenquist’s Aripeka, Florida, studio and office. Much of the artist’s archives, including documentation, photographs, and works on paper, is damaged or lost. In the spring Leo Castelli Gallery, New York, features Rosenquist’s series Gift Wrapped Dolls (1992–93), along with his painting Masquerade of the Military Industrial Complex Looking Down on the Insect World (1992), in a solo show. Rosenquist’s Gift Wrapped Dolls are also featured in solo shows at Akira Ikeda Gallery, Tokyo, and Feigen, Inc., Chicago. 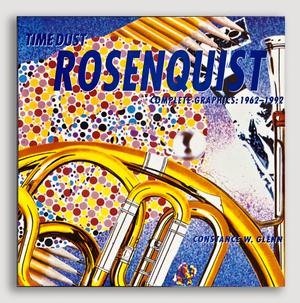 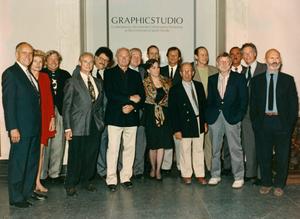 Rosenquist’s collaboration with Graphicstudio/University of South Florida, Tampa, is honored in the exhibition James Rosenquist: A Retrospective of Prints Made at Graphicstudio 1971–1996, installed at the College of Fine Arts, University of South Florida. In the spring Rosenquist is featured in a solo show at the Leo Castelli Gallery, New York. He creates a series of twenty-six gun paintings, which are featured in the spring in the exhibition Target Practice: Recent Paintings by James Rosenquist at Feigen, Inc., in Chicago.

Rosenquist designs a set of six espresso cups and saucers for Italian coffeemaker Illycaffè, which are introduced in late April as the Italian Riviera collection. The cups are decorated with a motif of colorful paper strips, described by the artist as “colored pieces from a straw hat.”26 In November he begins discussions with the Solomon R. Guggenheim Foundation, New York, for a mural commission of “an updated version of F-111.”27

Rosenquist receives an Honorary Doctorate of Fine Arts degree from Bard College, Annandale-on-Hudson, New York, on May 24. The Center for Contemporary Graphic Art and Tyler Graphics Archive Collection of Fukushima, Japan, host The Graphics of James Rosenquist. In the fall, in New York, he is included in the celebratory Leo Castelli Gallery exhibition Forty Years of Exploration and Innovation: The Artists of the Castelli Gallery 1957–1997, Part One. He begins the Guggenheim commission—requested for the new Deutsche Guggenheim Berlin exhibition space—in his Aripeka, Florida, studio and completes one of the three paintings that constitute this three-part installation work entitled The Swimmer in the Econo-mist (1997–98). 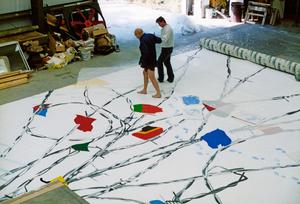 Rosenquist applying painted footprints to the 24-by-133-foot painting Celebrating the Fiftieth Anniversary of the Signing of the Universal Declaration of Human Rights by Eleanor Roosevelt, 1998, with help from studio assistant Darren Merrill, Aripeka studio, Florida, 1998.

Rosenquist paints Celebrating the Fiftieth Anniversary of the Signing of the Universal Declaration of Human Rights by Eleanor Roosevelt in response to a commission from the city of Paris for a mural to mark the anniversary; it is intended for installation on the ceiling of the Palais de Chaillot, a government building, but remains in the artist’s collection after a change in city leadership. He completes the three-painting suite The Swimmer in the Econo-mist (1997–98), which is installed in the spring at Deutsche Guggenheim Berlin as the institution’s first commissioned work and second show. The exhibition space is located on Unter den Linden, in former East Berlin, on the ground floor of Deutsche Bank’s offices, and the exhibition celebrates the cooperative endeavor between Deutsche Bank and the Solomon R. Guggenheim Foundation. The subjects of The Swimmer in the Econo-mist are industry, consumerism, and the turbulent nature of the economy as a whole. The painting also refers to the wars that shaped the twentieth century, as the images borrowed from F-111 (1964–65) and Pablo Picasso’s Guernica (1937) suggest. Hugo Boss designs and produces an edition of 250 “Rosenquist” paper suits in conjunction with the show.

In the fall Rosenquist is represented in the exhibition The American Century: Art and Culture 1900–2000 at the Whitney Museum of American Art, New York. He begins relatively abstract paintings for the Speed of Light series, which he will work on until 2001. At ULAE he produces a related series of prints with imagery derived from the paintings.