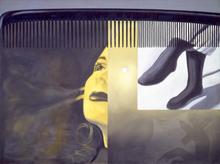 ‘A pair of sock-clad feet jut out over the face of a dreamy, smoking femme fatale, drawn from a Philip Morris advertisement. An outsized hair comb structures the upper edge of the canvas, whose swirling strokes are illuminated by an acid neon glow. Our perspective shifts as we scan the picture; the relationship between its disparate elements is elusive, ambiguous, enticing.

This is “The Light That Won’t Fail I”, James Rosenquist’s early experiment of collaging painting and layered images to transform the commercial and banal into something strange and uncanny. It visits from Washington’s Hirshhorn for Ropac’s expansive museum-quality exhibition of 1960s works, the first London show for three decades of the playful, thoughtful American painter who began his career on the streets - “I painted billboards above every candy store in Brooklyn” - and became a pioneer of both pop and immersive, experiential art.

You can walk through the three-metre high “Forest Ranger”: an interactive, free-hanging painting on strips of industrial Mylar depicting a military vehicle based on a General Motors Chevrolet advertisement, with images of carcass-cutting technologies painted on a sliced canvas. The motorized “Yellow Applause” features two hands on separate canvases, brought together to clap.

In “Reification”, lightbulbs and empty sockets are set on a red fragmented rectangle to spell out the first three letters of the painting’s title, as in an advertising slogan or shopfront. In “Painting with Bulb”, a white camera emerges from an image of a summer sky, imitating streaks of sunlight passing through clouds and also the photographer’s invasive flash - a surreal composition which pulls together Rosenquist’s life-long themes: the image as object, the observer versus the observed, the complexities of perception.’