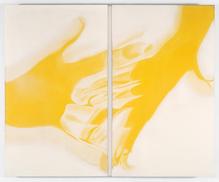 Perhaps the first time that the Minimalist pioneer Donald Judd and James Rosenquist occupied the same space was in a 1964 issue of “Art in America.” In Judd’s August survey of gallery goings-on (including blurbs on Roy Lichtenstein, Robert Rauschenberg and Ellsworth Kelly), the then part-time critic refers to Rosenquist as one of the patriarchs of pop art, and to his “billboard technique.” (Rosenquist did paint large-scale advertisements for a living in the late ’50s.) “There is never any possibility of Rosenquist’s paintings being mistaken for billboards, however, as Lichtenstein’s paintings are mistaken for comics,” Judd writes. “The conspicuous fragmentation of the various subjects is immediately recognizable as art.” Half a century later, the pair meets again — at the Judd Foundation’s SoHo branch, where Donald’s son, Flavin, is installing five of Rosenquist’s pieces on the ground floor of his deceased father’s former home and studio....