“We anticipate a fantastic and successful exhibition with this presentation of an important selection of James Rosenquist’s work. This has largely been possible through a close collaboration with the Museum Ludwig in Cologne and the James Rosenquist Studio,” says Erlend G. Høyersten, museum director, ARoS.

From the late 1950s, along with Andy Warhol and Roy Lichtenstein, Rosenquist was instrumental in creating work that established what became known as a significant art movement: Pop art. He became particularly well-known for the use of visual advertising techniques and images repurposed for his fine art career in the 1960s and the huge billboard-size paintings he began creating in the 1970s. The inspiration for his compositional style and scale came from Rosenquist’s experience as a billboard painter in the American Midwest and in New York City in the 1950s. Some of Rosenquist’s works stand three to five meters tall and measure ten meters in length – one even exceeding 27 meters.

“Rosenquist wanted to break with the idea of the picture plane in painting, instead creating the feeling of walking into an illusion. That’s the reason he used these massive and overwhelming, almost immersive, picture planes, which he, in some cases, constructed as entire spaces. Here, viewers are immersed by the work and will have the opportunity to dive into the painting in a visual sense,” says Lise Pennington, chief curator, ARoS, and curator of the exhibition.

The exhibition at ARoS features more than fifty artworks – including some source collages never before exhibited – and a selection of rarely seen archival material. It is centered on three of Rosenquist’s monumental room environments: Horse Blinders (1968), which has undergone detailed conservation by Museum Ludwig between 2015 and 2017; Horizon Home Sweet Home (1970), which demonstrates the illusive nature of the image and of vision with the performance of dry-ice fog within the vibrantly colored and mirrored panels of the room; and the monumental three-painting-suite, The Swimmer in the Econo-mist (1997-98) that extends more than twenty-seven meters and is on loan from the Guggenheim Museum, New York. The three environments are supplemented by other central works from Rosenquist’s production from the late 1950s until 2012, including an important F-111 print portfolio (1974) on loan from the Estate of James Rosenquist.

James Rosenquist (1933-2017) was born in North Dakota and studied studio art at the University of Minnesota, in Minneapolis. In 1955, he moved to New York City where he studied at The Art Students League for one year and met artists from the generation that preceded Pop art (the Abstract Expressionists). In 1960, he rented a studio in a building in lower Manhattan that housed several artists who also became well known, including Ellsworth Kelly and Agnes Martin (whose studio Rosenquist took over). He became friends with other artists working nearby, including Robert Rauschenberg and Jasper Johns. Writers such as Jack Kerouac and Allan Ginsburg were leading figures in American literature during this time while Dean Martin, Jerry Lewis, and Thelonious Monk were predominant on the entertainment and jazz scene in the circles frequented by Rosenquist. Before renting the studio in lower Manhattan to focus on his fine art career, Rosenquist had worked as a commercial artist in Brooklyn and Manhattan painting the same motifs over and over. In his own words: I painted billboards above every candy store in Brooklyn. I got so I could paint a Schenley whiskey bottle in my sleep.

To accompany the exhibition, the catalogue James Rosenquist: Painting as Immersion has been published in Danish, English, and German. It is a comprehensive publication comprising the most recent scholarship in the field. In addition to contributions by the directors of the Museum Ludwig and ARoS – Yilmaz Dziewior and Erlend G. Høyersten – the authors include Tom Holert, distinguished German art historian, taking an in-depth look at Rosenquist’s unique spatiality; Stephan Diederich, curator and specialist at Museum Ludwig, giving a review of the themes in the exhibition; Sarah Bancroft, art historian, curator, and Rosenquist expert who co-curated the 2003 Guggenheim Museum Rosenquist retrospective (and current head of the Rosenquist Foundation and the studio) illuminates Rosenquist’s seminal source collages; Tino Grass, German designer and researcher, revealing new perspectives on Rosenquist’s historic work F-111; Isabel Gebhardt, Museum Ludwig conservator, outlining the intensive research efforts and conservation work recently undertaken on Horse Blinders; and Tim Griffin, former editor-in-chief of the esteemed American art journal Artforum, discussing the political potential of Pop art as exemplified by a work James Rosenquist created for one of the magazine’s issues.

Press photos may be downloaded free of charge from Dropbox [on the museum website]. Please remember correct and appropriate accreditation. 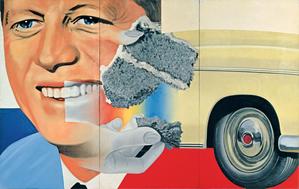