For me, it recalls my Seattle days, my early twenties, and the many nights I spent at the Cha Cha, a rock- and-roll-meets-tiki-bar on East Pine Street, right next to Bimbo's Bitchin' Burrito Kitchen. The Cha Cha, a place seemingly lifted from a tropical locale somewhere south of Acapulco, was all red light and black leather and velvet paintings. It was frequented on any given night by all of our friends, the local scenesters alongside the very famous.
Because the year was 2000 and no such bans had yet passed, we could still smoke and the bar kept little black matchbooks that read Cha Cha on the front and “good clean fun,” exclamation mark, on the back. I remember being at once utterly confused and entirely bemused by this expression. I had never heard anything like it, and, to this day, it remains as mysterious, sexy and evocative as it was for me then. Never elucidated. Three words as one. GOOD. CLEAN. FUN.

During the biggest snowstorm of this past winter, I was reminded of some good clean fun when I came across Gordon Matta-Clark’s Belly Curtain, an Homage to Christo's Valley Curtain, a delightful work from 1971 being offered in Sotheby’s sale of highly personal pieces from the collection of Christo and Jeanne- Claude.

A young Gordon had helped Christo construct a scale model for Valley Curtain, the artist’s 1,300- foot curtain project in Colorado. Later, Matta-Clark, collaborating with his friend Kitty Duane, a dancer, riffed on the Christo project, creating a suite of photographs in which hand-embellished miniature curtains drape little “valleys” between parts of their naked bodies. Matta-Clark gave these pictures to Christo and they remained in the artist’s collection for the next fifty years, until his death last summer.

That very work, in that very moment, gave me the idea of a sexy, evocative show.
Remarkably, the work has never been shown publicly in New York. Thanks to the generosity of the Gordon Matta-Clark Estate, prints of three archival photographs used in the creation of Belly Curtain, an Homage to Christo's Valley Curtain, are presented now for the first time in New York, only a few blocks from where they were created fifty years ago.
Good Clean Fun remembers a time that feels possible again, urgent even, a time of spontaneous, explosive, messy good clean fun.

Off Paradise is a new gallery on Walker Street founded by Natacha Polaert in the fall of 2019. The name evokes the old neighborhood of Five Points, at the center of which was a small, triangular park, full of hope and grime, called Paradise Square. It also invokes Paradise Alley, the artists’ and poets’ colony on the then-godforsaken corner of Avenue A and East 11th Street that is referenced in Jack Kerouac’s novel The Subterraneans. Off Paradise is a fictional place, right off Paradise, adjacent to it, but not exactly it.

I would like to express my sincere gratitude to Gina Nanni; to Jane Crawford and Jessamyn Fiore of the Gordon Matta-Clark Estate; and to Mimi Thompson, Lily Rosenquist and John Corbett of the James Rosenquist Estate. 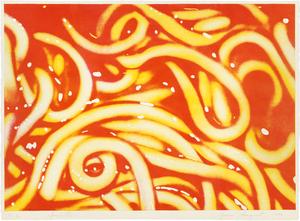