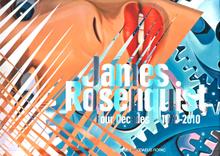 Raised in the Midwest, James Rosenquist (born 1933) worked as a billboard painter before rising to fame in the 1960s as a leading figure of the Pop art movement alongside contemporaries Andy Warhol, Roy Lichtenstein and Claes Oldenburg. Drawing on his experience as a billboard painter, Rosenquist’s work plays on the iconography and style of advertising and mass media to create distinctive compositions that explore the culture of capitalism. James Rosenquist: Four Decades, published to accompany an exhibition at Galerie Thaddaeus Ropac, offers a selective survey of the artist’s work since the 1970s, touching on themes as multifaceted as aesthetics, geopolitics, technology, ecology, outer space and time travel. A selection of the artist’s rarely seen collages of source material is also included in this volume, offering a glimpse into the thought process behind Rosenquist’s meticulously finished paintings.